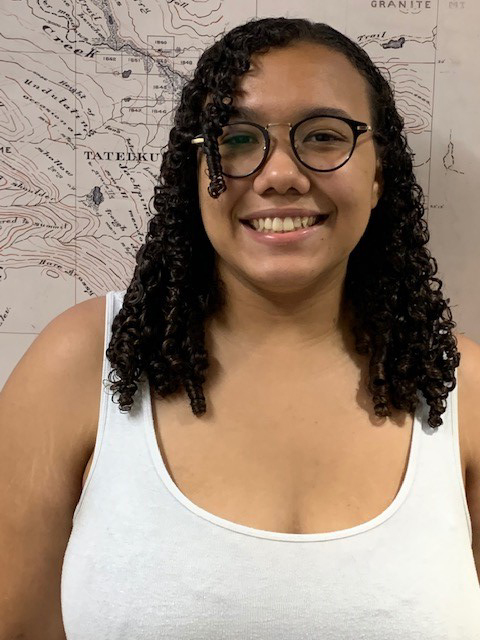 The Department of Geography has a new work-study student helping out in the office, 202 Stewart – Sarina Neal, a sophomore with a double major: anthropology and ancient Mediterranean studies.

Neal will be doing a variety of tasks, including working on the Missouri Geographic Alliance’s Giant Traveling Map program, running campus errands, assisting with editing of social media of web articles, and a variety of other duties, as needed. She will average 6.5 hours in the office weekly.

Neal says she first became interested in her double major after seeing the 1999 version of “The Mummy” with Brendan Fraser, an actor and comedian who was popular in the 1990s and early 2000s. “The original picture came out in 1932,” Neal says.

In the 1999 version, Fraser had a female partner in the movie named “Eve” played by actress Rachel Weisz. “Rachel was an Egyptologist/archaeologist and she was so cool, deciphering hieroglyphics. I said, ‘I think I want to make that my major’ and I did.”

“I just thought [anthropology] was a pretty cool major and so I decided to major in it when I started college.”

She hopes, after graduation, to work for a government agency or museum that’s researched-based and will send her around the world, as needed. “Because I do have an ancient Mediterranean studies [background] they could send me to Greece to like dig up human remains or temples. And then because I am an archaeologist, I can go anywhere in the world where there are human remains and dig them up. The process is hard to dig up old human remains.”

She says she also enjoys geography.

Neal is from Las Vegas, Nevada, and selected Mizzou because they didn’t have a school with a PhD program on the West Coast. She says she looked in the Midwest and on the East Coast, but liked Mizzou because “they have a pretty good program, and it’s a nice college town.”

She is attending here with her sister, Erica, who she says is her best friend and is majoring in astrophysics. For hobbies Neal likes to read about history, enjoys books that are 100 years old or greater, and loves to engage in ancient Greek translated poetry. She also likes to draw and enjoys sports.