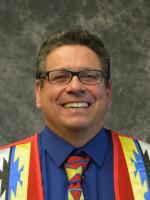 Associate Professor Mark Palmer was invited to speak at Yale University on the topic of “Mapping with and for Indigenous Peoples” on Oct. 4, along with Laura Smith from Macalester College and Annita Hetoevehatohke’e Lucchesi from the Sovereign Bodies Institute and University of Lethbridge.

Palmer spoke before approximately 100 people on how indigenous communities might get involved in the co-management and decision-making process at UNESCO World Heritage sites through the creation and sharing of story maps.

“I provided a conceptual model of what an Indigenous story map might include — like places, names, stories, interpretive attributes, and indigenization,” he says.

Palmer has been studying Indigenous peoples since the mid-1990s.  “I’m still in the process of learning,” he says. “It’s a never-ending process. Indigenous communities can and are being very creative with digital technologies, like maps and GIS, to tell their stories, in their own words. This is very important because story mapping can put indigenous knowledge into proactive and lead to new culturally appropriate innovations.”