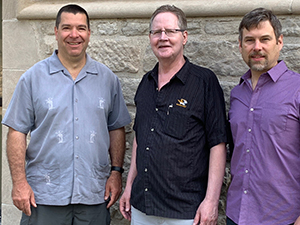 Photo caption: (Left to right) Dr. Michael Urban, Dr. Joe Hobbs and Dr. Soren Larsen will take on new roles in the Geography Department at Mizzou during the upcoming year.

Larsen has been with MU since 2005, and was recently promoted to full professor. In his new role, he hopes to continue in Urban’s footsteps.

“Mike has ushered us through some turbulent times and positioned us for growth,” Larsen said. “My vision is to grow the department in a way that recognizes and celebrates the breadth of the discipline of geography and the work of our faculty and students.”

Urban has been with the department since 1998. He will leave for his fellowship this September and return to the Geography Department in time for the Fall 2020 semester. The office he will be working with is the primary point of contact between the U.S. Government and the United Nations. In that capacity he expects to primarily serve as a foreign affairs officer and food security advisor for the U.S. State Department of State in the Bureau of International Organization Affairs.

“One reason I am excited to participate in the AAAS STPF program is because I firmly believe one of the most impactful ways we as academics can make a difference is to engage in the critical process of building more effective bridges between science, outreach and public policy,” Urban said. “This will allow me to learn these skills by doing and bring this expertise back to my students, Geography, Arts & Science and Mizzou.”

Dr. Joe Hobbs, who has been with the department for more than 30 years, retired this summer but will continue teaching periodic classes as professor emeritus. Hobbs’ research expertise is field work on the lifeways of nomadic Bedouin in the deserts of the Middle East. He also investigates the Neolithic and Predynastic habitation of the eastern desert of Egypt; human uses of caves in Madagascar, Mesoamerica, Malaysia and Indonesia; and the global narcotics trade.

Hobbs says he will continue his research, including that in Saudi Arabia and Vietnam.