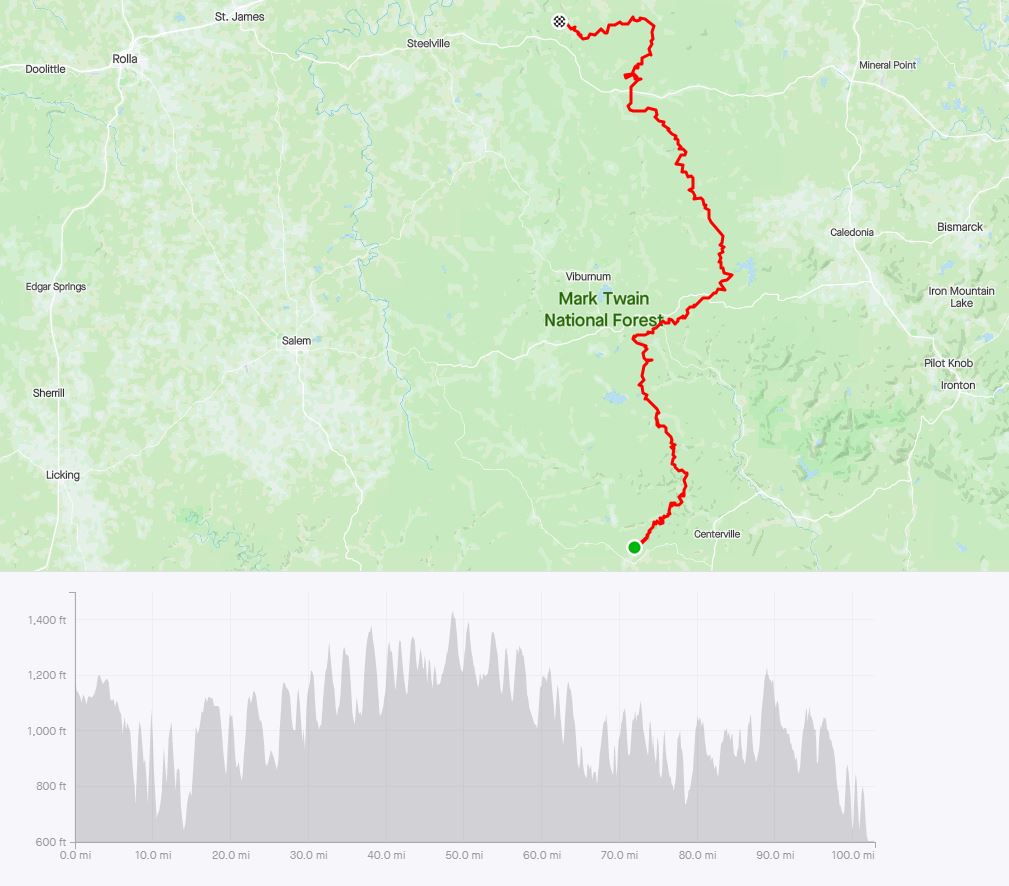 Map and elevation profile of the course running from near Reynolds to Bass River Resort, Steelville, MO.

Imagine running down a narrow leaf-covered trail full of rocks, roots, and downed trees in the middle of the night, with a lamp that isn’t working properly sometimes leaving you in total darkness.

Imagine falling, not once, not twice, but five times while trying to maneuver across rugged terrain with an elevation gain of 10,000 to 12,000 feet. Imagine hearing critters rustling in the bushes surrounding you. Imagine being alone in the wilds of Missouri, running 100 miles, from dawn to dusk to dark to dawn again. Running, running, running.

Imagine getting lost for a mile and a half, slipping and hitting your hand on a sharp rock, bleeding hard until rescued by a race aid a short distance away who put a bandage around it. Imagine your quads getting so sore you have to slow to a walk. Imagine being fueled by gels filled with maple syrup and honey, washed down with water and sports drinks, because the checkpoint food – quesadillas, grilled cheese, soup, cookies and fruit – is too difficult to process later in the race, as the running diverts blood away from the digestive system.

Imagine doing all this because you love to. 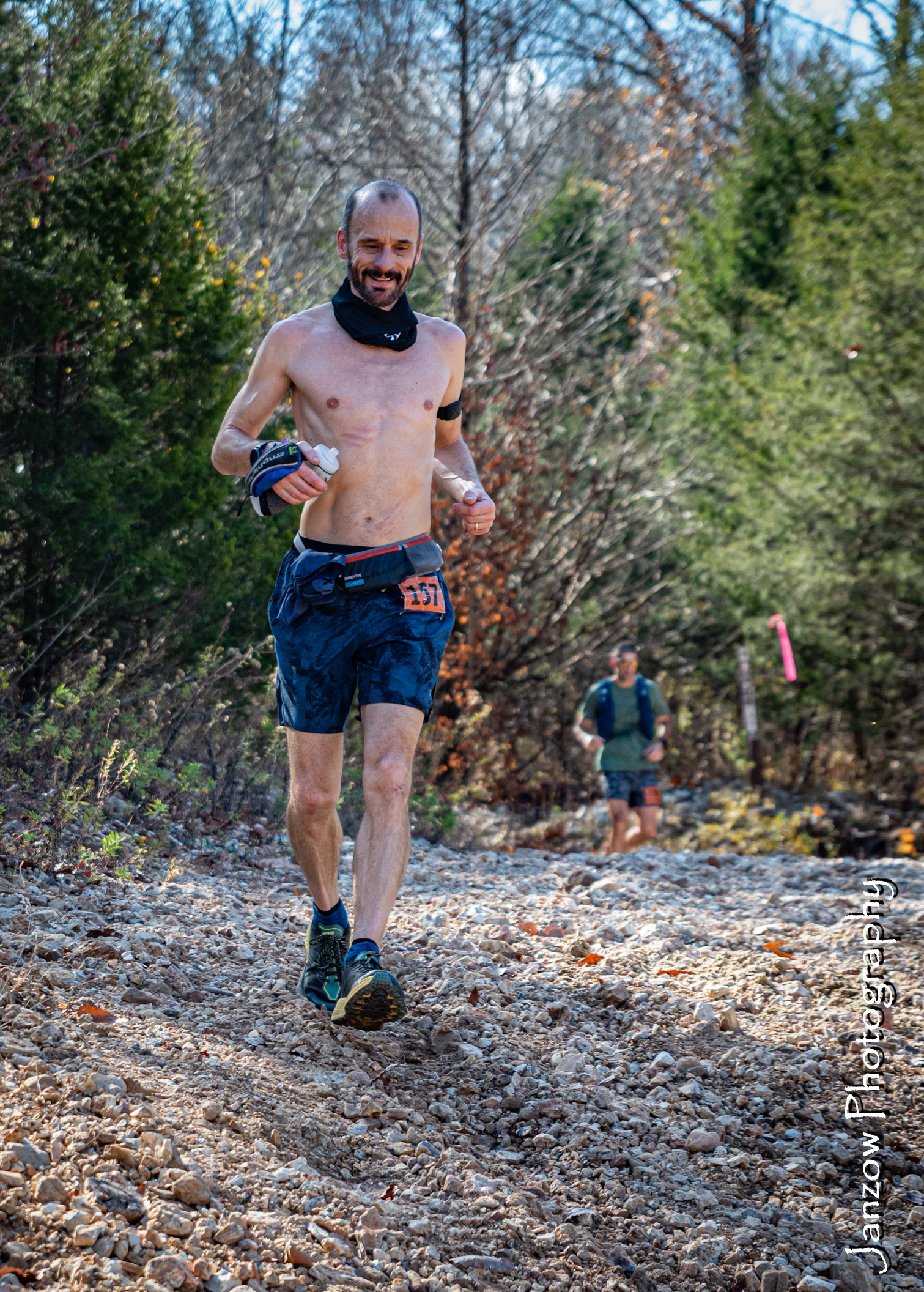 Andy Emerson during the first 40 miles of the race. Photo by Janzow Photography.

This is the life of Andy Emerson, the Department of Geography’s (and History's) senior business support specialist. While others were glued to the TV on Saturday, Nov. 7 watching the presidential win, Emerson was racing from checkpoint to checkpoint along a trail near Reynolds, Missouri, to Bass River Resort in Steelville, Missouri, as part of the Ozark Trail 100-Mile Endurance Run.

“I think the reason I do race … it seems like a really good opportunity to disconnect from everything. It’s quiet and you can kinda like think about nothing, de-stress,” says Emerson. “I also enjoy the trail community. It’s a good way to get to know people through the social aspect of running. You can run with people or run alone; you have a choice, and I like doing both.”

“I think the reason I do race … it seems like a really good opportunity to disconnect from everything. It’s quiet and you can kinda like think about nothing, de-stress.” - Andy Emerson.

Seventy-nine people started the race; only 45 finished, says Emerson, who has finished the race three times, the other two in 2010 and 2015. Emerson has run more than 100 miles at a time 17 times in his lifetime. Other races include the Leadville Trail 100 in Colorado; the Kettle Moraine Race in Kettle Moraine State Forest in Wisconsin; and other types of races, such as timed 24-hour races where he reached or surpassed 100 miles. In addition, he’s completed many backyard ultras, where runners race a 4.16-mile loop in an hour, repeatedly, until people drop by not making the goal – a last-man-standing type competition.

“Out of the 17 times I’ve run 100 miles or more, I believe that seven of them were the backyard races,” Emerson says. “Only nine were traditional 100 miles – where you know going into it the finish is 100 miles. 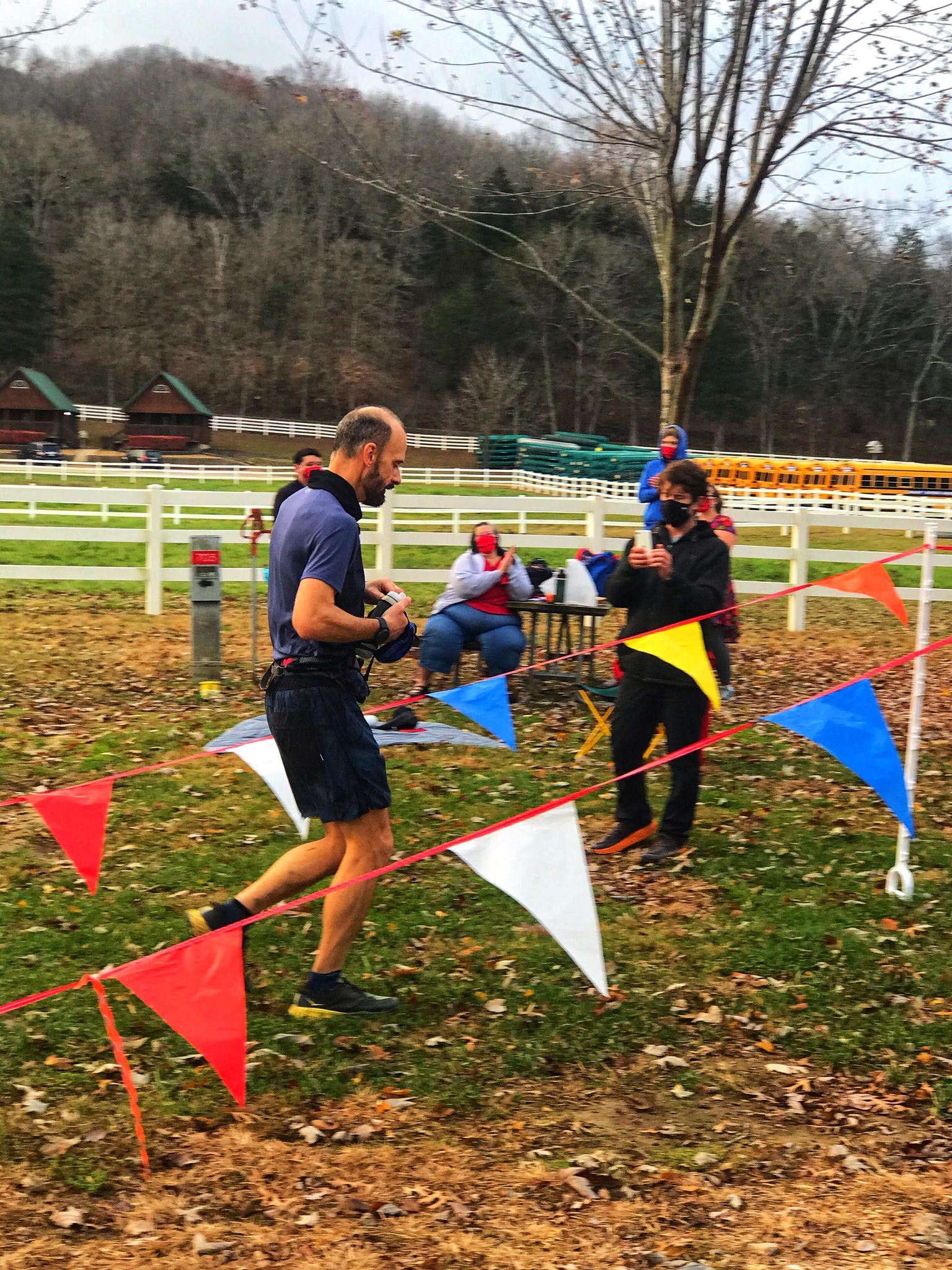 Andy Emerson at the finish line. Photo by Andrea Earlywine.

In this particular race, as was his goal, he completed in the Top 10. He placed 6th after running 25 hours and 25 minutes.

“When I got to 90 miles, even though I knew it would be a few hours more because I really slowed down, I knew I was going to finish,” he says. “Closer to the finish, I did run a bit the last six miles although very slow. Since I finished in the daylight, there were friends cheering at the finish that had been crewing and pacing other runners who had dropped from the race. It was nice. Sometimes there’s nobody there. Especially if you finish really early in the morning.”

Emerson has been running since junior high school, when he was doing track and cross-country races. In high school he began doing 5ks and 10ks. In 2004 he ran his first marathon, a 26.2-mile race in Columbia called the Heart of America. Then he progressed to Ultras, which are 50K (31 miles), 50 miles, 100K (62 miles) and 100-mile races.

“It’s hard, mentally at some point you do almost feel like giving up. But I look at how much time I have left and think ‘I should keep going.'" - Andy Emerson

“It’s hard, mentally at some point you do almost feel like giving up,” he says. “But I look at how much time I have left and think ‘I should keep going.’

“After you do (100 miles) you have a hard time wrapping your mind around the fact that you just ran 100 miles – and believing you still could actually walk. This time I did not even unload the car. I got in bed and took a nap, slept an hour, felt a lot better, and then got up and unpacked.

“The first day, I was really tired,” he adds. “I wanted to sleep a lot for a couple days. But surprisingly, legs recover pretty quickly. By Monday I was walking and Tuesday I was normal, out doing yard work.”

“I don’t know yet,” he said. “It’s too soon. I will definitely do more races; not sure I’ll do this particular one again. We’ll have to see.

“This felt like one of the harder efforts I have done in a while, but in its own unique way. This course is definitely a big challenge for me. Time will tell if I’m confident enough to attempt it again in five years or sooner.”