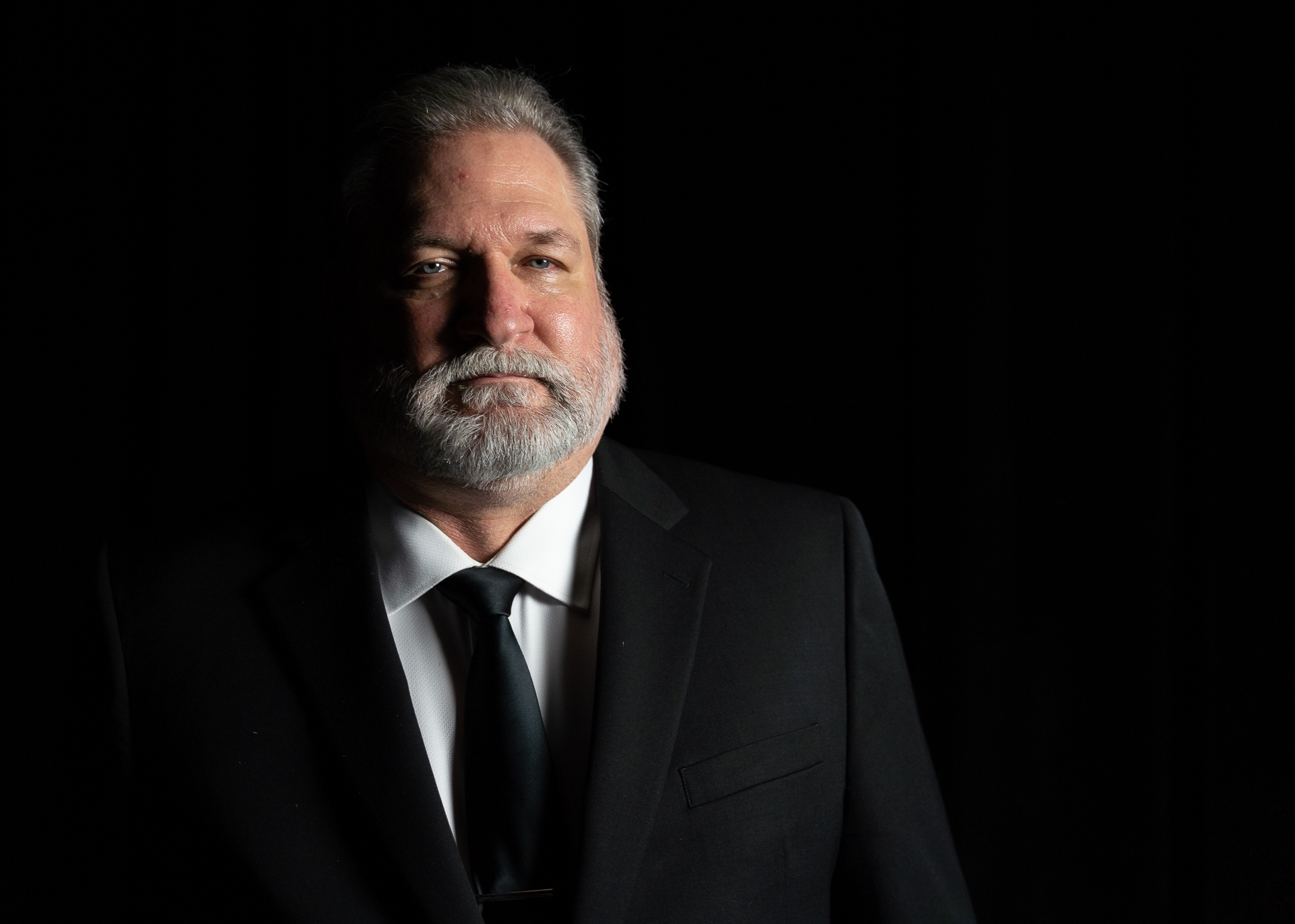 Encourages others to ‘don’t stop’ moving toward their goals

When Mizzou geography student Jeffrey Ford walks during his commencement ceremony in May, the experience will be bittersweet.

Ford, who is in his late 50s, is a Desert Storm Army Veteran (82nd Airborne Division), and once faced housing insecurity due to a severe back injury caused by paratrooping in the service. Still, he has risen through the military and civilian ranks despite many obstacles.

“Most students — they are going to be looking forward to getting out in the world and doing stuff, and I am, too. But I’m going to miss a lot of people. It’s going to take a while for me to not be around them anymore. I think, ‘Gosh, I made some great friends and have been inspired by some great young people who I think will be the greatest generation because they are going to save us, ourselves, this planet.’”

Ford, who once was considered homeless by the U.S. Department of Veteran’s Affairs (VA) because he did not live in a permanent residence with a mailing address and a place to really call home, says it is tough to talk about that part of his past due to the judgement of others.

“I don’t want to dodge it,” he says. “But look at the things I have contributed to my success here at the University of Missouri. I would not have gotten anywhere if it hadn’t been for the geography department. But all the pieces that go into student success at MU — it just hasn’t been one or two things: It’s been Residential Life, it’s been the people in Food Services (Campus Dining Services), the College of Arts and Science, the Dean’s office, Financial Aid, the Mizzou Store, Office of Cashiers, Dr. Jim Spain (vice provost of undergraduate studies), the Disability Center, the Student Veterans Resource & Support Center — there are a lot of things here that attribute to student success.

“And I don’t believe for one minute that they are just interested in me. I think they do it for everyone. In fact, I’m positive they do. I’ve felt like I’ve had personalized service. And that’s pretty amazing when you think of a university our size putting so much effort into its students.”

Ford, who has post-traumatic stress disorder and served as a combat engineer while in the Army, is considered 100 percent disabled by the VA. He said his homelessness began when he was living in Kansas City and knew he needed back surgery due to seven blown discs. After surgery, he spent six weeks in a nursing home in Lenexa, Kansas, but upon leaving did not have a place to stay. So, he moved to Columbia where his mother lives and approached Welcome Home, a nonprofit center that provides transitional and emergency shelter, permanent housing, employment assistance, and wrap-around supportive services to at-risk and homeless veterans.​

“They were able to provide living arrangements so I could recuperate, which set me up to go back to school.”

I enjoyed college. It’s stimulating and I figured it would be a big win at my age to go back to college and succeed. I was at the point in my life where I wasn’t going to be able to work anymore. There are certain times that life throws you curves, and you have to shed that skin and try something else. - Ford

A Change in Path

Ford, who worked in the construction industry, said he could not return to his normal occupation, so he enrolled at MU in 2018.

“I always enjoyed school,” Ford says. “I enjoyed college. It’s stimulating and I figured it would be a big win at my age to go back to college and succeed. I was at the point in my life where I wasn’t going to be able to work anymore. There are certain times that life throws you curves, and you have to shed that skin and try something else.”

He fully expects to graduate in May 2022. “There’s a lot riding on it. And really this is not so much for me, as for me providing an example to others. Whether it’s other veterans, or people who are going to be around veterans, or the disabled, or older students.”

During his time at Mizzou, Ford has celebrated many successes. He’s been a Missouri Students Association senator all four years and served as the Mizzou Student Veterans Association secretary and then president, received the Chancellor’s Excellence Award for Outstanding Transfer Student, is a member of the Tau Sigma National Honor Society, and more.

This is a huge endeavor compared to what he called a “slow slide” downward prior to the changes he made to improve himself. “You really don’t know how PTSD affects your life until you look back on it,” Ford explains. “You know it could be failed relationships, a career gone, or health issues. And in many cases, substance abuse and addictions. It’s not something that happens overnight. A lot of service members who get out do their best to readjust back into civilian life, and, for the most part, they do fine. But in some cases, it’s more of a struggle, depending on their experiences while they’re in the military, as well as their family and support networks when they get out. And some just struggle to find themselves.”

Ford says most men and women who enlist in the military, join at a young age and have not solidified their self-identity. During the military, they are told what to do, where to go, etc. When they get out they feel a little lost.

“They haven’t had that time as a young adult to develop themselves,” Ford says. “So, in a sense, they get out and have an early life crisis.”

Free Spirt at Heart; Geography as a Base

Ford takes a free-spirited approach to life, stating mainstream living is not for him.

“I’ve always been interested in doing a great number of different things. I’ve never wanted to settle into a lifelong career and just do that one thing. I get bored easily. What I like about geography is you can go in a million directions with it. And there’s never a chance to get bored as it is just so expansive. Take a look within our department — Dr. Clayton Blodgett’s GIS (Geographic Information System) and Dr. Mike Urban’s Earth Science. There’s geopolitics, climate change and human interaction, the subjects that Dr. Grant Elliott specializes in. Dr. Elliott has such interesting classes that are relevant. He does a great job of explaining the cycles of the Earth and the planet that we live on, as well as what happens when we create imbalances in those systems. I believe everybody who has had his classes really enjoyed them.

“People ask me what geography is about, and the only answer I have is ‘What is it not about?’”

People ask me what geography is about, and the only answer I have is ‘What is it not about?’ - Ford

On paper, Ford’s emphasis is on physical and environmental geography. “But I’ve taken nearly every class in the department — from Dr. Joe Hobbs’ Drugs and Terrorism, to Migration and Immigration with Dr. Matt Foulkes. I have studied it all. And it’s not a department like any other on campus in a sense that you can go in so many different directions with it, such as geospatial, national security, urban planning, or the agriculture field — soil and crop maintenance and analysis. You can go into peace studies or political science. I would definitely advise students who aren’t sure where they want to go with their academic career to pursue geography.

“I was telling Dr. Spain that I wouldn’t have had the success if I hadn’t selected geography. And Spain agreed, “Yeah, it is a family,’ he said. Ford adds: “We have cookouts and the geography faculty band; we are on a first-name basis with everybody. It’s intimate, it’s close, and it’s full of good people.”

Upon graduation, Ford plans to travel around the world and experience life on all levels: poverty, food insecurity, water scarcity, climate change, access to clean water, social and economic challenges, and so on.

“I’d like to see those vulnerable places and find commonalities among Indigenous populations’ adaptation and innovations that may be transferred to other parts of the world,” Ford says. “I’d like to see some things before they disappear, like the Great Barrier Reef, or the ice shelf in Greenland. That way, when I am older, I can say, ‘I remember when I went to Greenland and it wasn’t green, it was still white.’”

Ford wants to do so without the weight of the material. “If someone gave me a nice house tomorrow, I would feel so encumbered that I would probably light it on fire,” he jokes. “I did love having a house when I was with my family, but there’s too much world out there to see and experience to be tied down. I grew up in the '60s and '70s. When most kids were playing children’s games, I was playing hippie.”

He says he understands the struggles of life, and knows others experience it too — feeling lost or misdirected, wondering where to go, what direction to turn.

“I just always figure there’s something bigger and better around the corner. I’ve accomplished things in my life that I didn’t think I could. If you feel like you are losing, go out and win, even if it’s a small win. One win can offset a couple losses, that’s for sure. And it can definitely turn the tide.

“We don’t realize the power and potential of every person to affect change, whether it’s in their own life or in the world around them. We get stuck in a box and play it safe. You’ve got to get out of that box. I mean that’s what every student at the university is looking to do. They’re changing their mindset whether they realize it or not.”