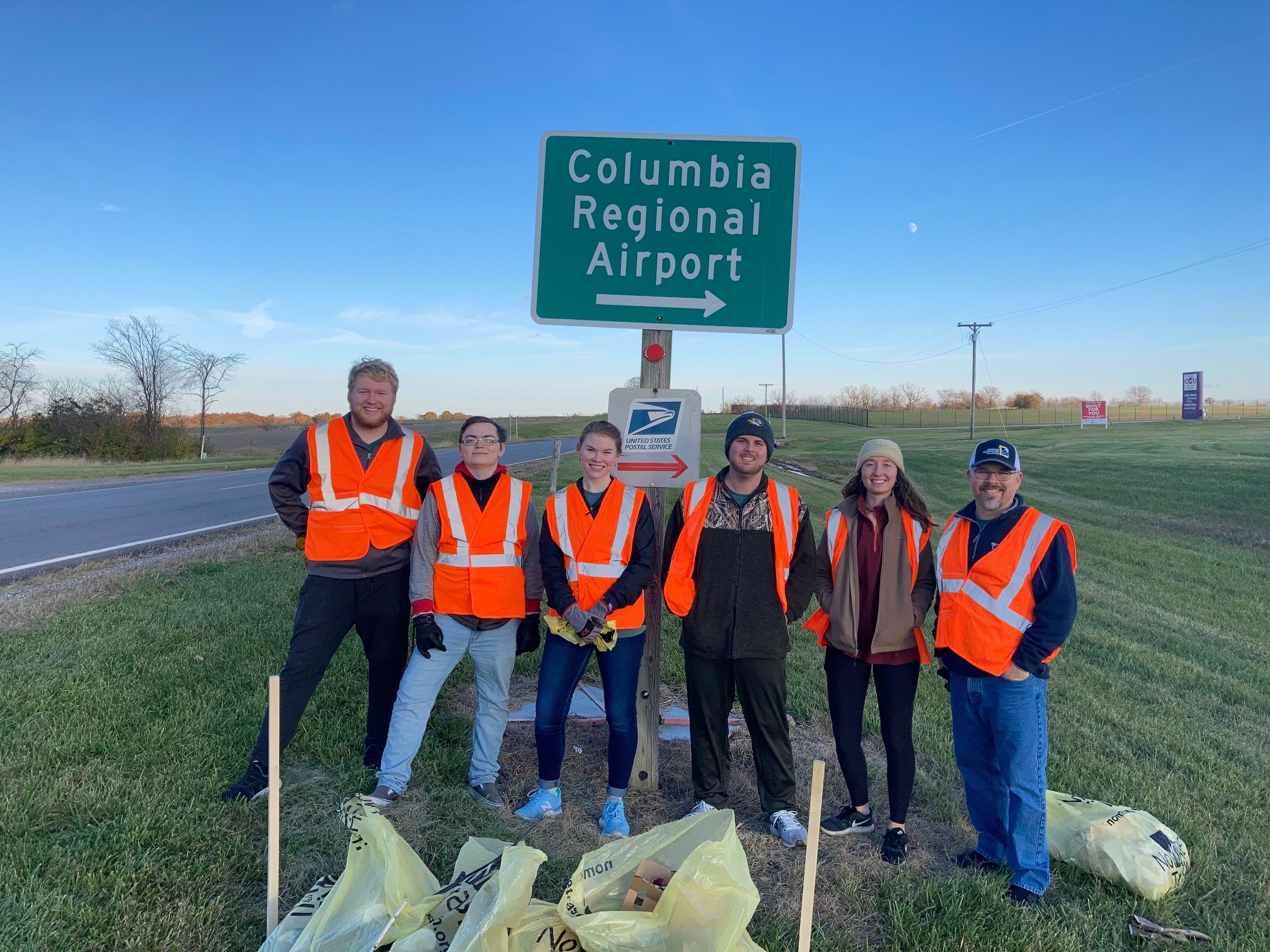 Students say it's their way of giving back to the community

On Sunday, Nov. 14, seven individuals from the Geography Club-Gamma Theta Upsilon scoured the highway along Route H, south of Columbia near the Columbia Regional Airport, collecting trash tossed out of moving vehicles, illegally dumped, or blown in from other areas.

It’s our way of giving back to the community, and representing the geography department as best I can. When I see clean streets and roads, it makes me think the people who live there care about where they live. - Kyle Bals

“The club, once a semester, goes out and picks up litter and trash along both sides of the highway – spring and fall,” says undergrad student Frost. They cover a half mile (both sides) of the one-mile stretch of highway maintained by the department each time they go out.

“It’s our way of giving back to the community, and representing the geography department as best I can,” adds undergrad student Bals. “When I see clean streets and roads, it makes me think the people who live there care about where they live.”

Bals and others said they were shocked about some of the items people throw out of their cars: beer bottles, Fireball bottles, a large battery, fast food bags, Styrofoam cups, tobacco, plastic fencing, bubble wrap … even half of a rotisserie chicken container.

“It was definitely disheartening,” Bals says. “I don’t understand why people wouldn’t just keep the trash in their cars until they could reach a dumpster.”

Grad student Kannarr said it was chilly and slightly windy during the approximate hour and 40 minutes they were out there.

“But the sunlight was nice, so it was bearable. Each of us had a bag, so we basically filled seven bags of trash. It was definitely fun, with random conversation and getting to know each other better. It’s always a nice time to get together with other geography people. It’s worth your time and effort to go help with something like this.”

Bals adds he learned a small group of people can make a difference in anything they do. “Treat the roads like they are in front of your own house,” he says.

Frost says she likes being involved in activities that help toward good stewardship of the Earth, looking after the planet’s health and aesthetics.

“It’s unfortunate that trash makes it out of our cars or vehicles onto the landscape,” she says. “Trash, in general, is an interesting and complex idea. Going out and picking up all the little pieces is a good way to be confronted with societal ideas about waste and the disposability of products. It makes you think.

“It’s maybe not the most glamorous, but the trash pickup is a great way to interact with a local landscape. You tend to think differently about a place you’ve invested time into, especially with friends,” Frost adds.