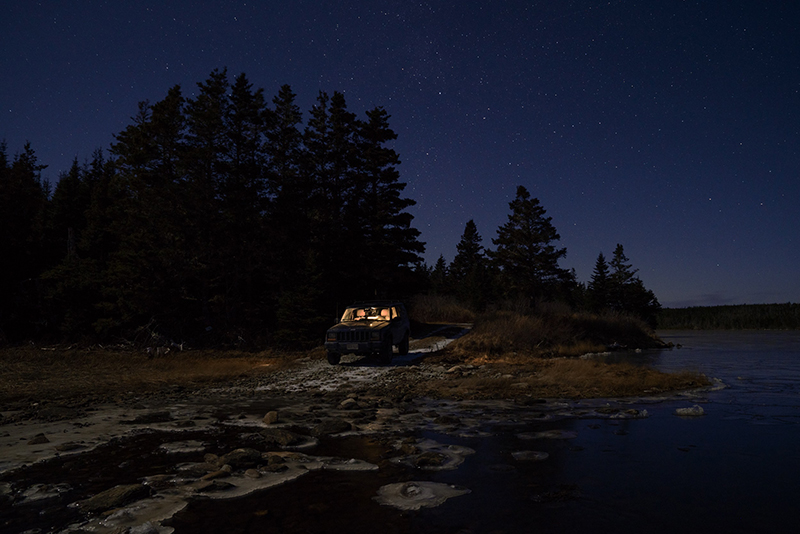 Soren and his traveling partner traveled in a Jeep through the wilds of Washington state.

When I was an undergraduate student at Illinois State University, I had a poetry professor, Cecil Giscombe, who, for whatever reason, took an interest in me. At the time, he was writing what he called a “long poem” about — get this — Bigfoot. Yes, the clandestine beast of the wilderness. Cecil wasn’t really interested in finding Bigfoot, per se; He was more interested in what the hairy ape represents, as a kind of liminal figure between the human and non-human, and one who calls that boundary into question.

Cecil had purchased a 1955 Willys Jeep from an old friend on Bainbridge Island, Washington, just across Elliott Bay from Seattle, and he was going out there to get it in June, but he needed someone to drive it back to Illinois. See, Cecil had a big bicycle trip planned with friends in British Columbia that summer, and it made sense for him to leave from Seattle rather than drive all the way back to the Midwest before heading west again. If I would drive the vehicle from Washington to the Heartland, he would pay for my plane ticket to SeaTac. To top it off, we could test drive the Willys for a couple of days in the Dark Divide, the largest roadless area of wilderness in the state, and home of the most Bigfoot sightings in the Lower 48. What do you think I said?

The Willys, it turned out, was a little worse for the wear, having sat in the cold Pacific rain for what must have been years. Tawny rust gnawed at the Army green paneling, and the spartan interior smelled of wet socks and acetone. Still, the vehicle started right up on the turn of a key and we rumbled down the road — well, across the ferry and then down the road — through Seattle’s clogged city streets and onto the highway for another 100 miles or so until we reached a little town called Randle, gateway, of sorts, into the Dark Divide wilderness.

Dusk had fallen, and it was another 15 miles up a steep logging road to the trailhead and our campsite for the night. Undaunted, Cecil threw the vehicle into gear. The Willys struggled mightily as the road climbed ever higher until a couple miles later, the engine started misfiring. Pop, sneeze, pop! Years of rain and disuse must have done more than rust the paneling! The jeep jumped and shimmied. Cecil fought the wheel, pushing the Willys ever harder, and we accelerated. I held desperately onto the seat with both hands (the Willys had no seatbelts), my eyes locked on the vehicle’s headlights as they ricocheted across the dirt road into the dark wall of trees on either side.

Now, and perhaps I should have told you this before, but Cecil has only one arm. It’s the result of a childhood injury, the details of which I never fully learned, and he uses a prosthetic attached to his shoulder with a grapple hook on the end to manipulate objects on that side. So, when the wheel popped out of his good hand, he overcompensated with the hook, and we careened off the road and bounced like a skipping stone until the jeep struck a grassy berm. The impact rattled me; momentarily, my eyes crossed. But before I could make sense of where we were, or even which way was up, Cecil flung open the door, jumped out of the jeep, and ran headlong into the pitch-black forest.

I sat there, dumbfounded. Now it struck me: I may have misestimated my poetry professor. Who was this guy I’d so nonchalantly thrown in my lot with? Was he a madman? Now that I was miles up some Godforsaken logging road with this one-armed lunatic, would he come back and kill me? Would he come back at all?

For the better part of an hour, I wrangled over whether it was better to sleep inside the truck for the night or start walking the lonely road back to Randle. My mind had arrived at the uncertain resolution that I would stay put with the Willys when suddenly, Cecil popped into the shaky beam of my flashlight, a big toothy smile on his face. I was flummoxed, disoriented — no, I was angry! What in the hell had he been doing out in the woods for the past hour? Where had he gone, leaving me all alone, and why? What on earth had gotten into him?

“I wanted to know what wild felt like,” Cecil said.

His words were calm, sober, a matter of fact. He looked at me piercingly, as though I should have understood his motivation all along, that his flight into the forest was clearly an essential and noble intellectual endeavor. As though running into the very heart of the Dark Divide like a banshee was the reason we’d come all the way up here in the first place.

What a revelation. This was a kind of learning unlike any I had ever known: improvised, roving, venturesome — undisciplined. It’s the kind of learning that happens when people go through wild experiences together, off on a real adventure, taking the risk of companionship on a ride so rocky that the proscribed roles of “student” and “teacher” fall apart, making co-learners of us all.

As you can probably guess, the university environment is not particularly conducive to undisciplined learning. The university is founded on discipline. Here, we’re holed up in classrooms and offices all day, trapped in endless meetings, held to the rigors of expectations and schedules and roles, to say nothing of the liability and lawsuits that would surely follow if we ever tried to break out of this too-safe regimentation! So, while I love undisciplined learning — it is, quite honestly, the reason I chose a career in academia — the adventure has been drained from my faculties over the years until finally, I found myself teaching this course, a course I have taught for nearly two decades, on little more than autopilot.

Weirdly, happily, the Coronavirus pandemic has brought my sense of adventure back and sharpened it, kind of like a good knapping stone. This pandemic is wild. It reminds me why adventures of this kind are so important, as difficult and traumatic as they may be.

When things fall apart and expectations fail, normalcy disappears and we become more aware, as if for the first time, of all the persons we are thrown in with — here I use the term “person” in the Indigenous sense to refer to all variety of nonhumans, like bats and viruses, for instance. We’re thrown in with these others not in a “good” way or a “bad” way, as it were, but rather indelibly, off on an adventure that makes learning into that strange kind of bonding that occurs when people navigate radical uncertainty together.

I said it on the first day of spring 2020 class, and I will say it again here: Geography is a spiritual discipline, or perhaps I should say, a spiritual undiscipline. Geography is an undiscipline rooted in adventure but founded on relationship, and always oriented to that unknowable terrain that lies just beyond the horizon.

Thank you for going on this adventure with me, whether you wanted to or not, during this strange and remarkable pandemic of 2020.