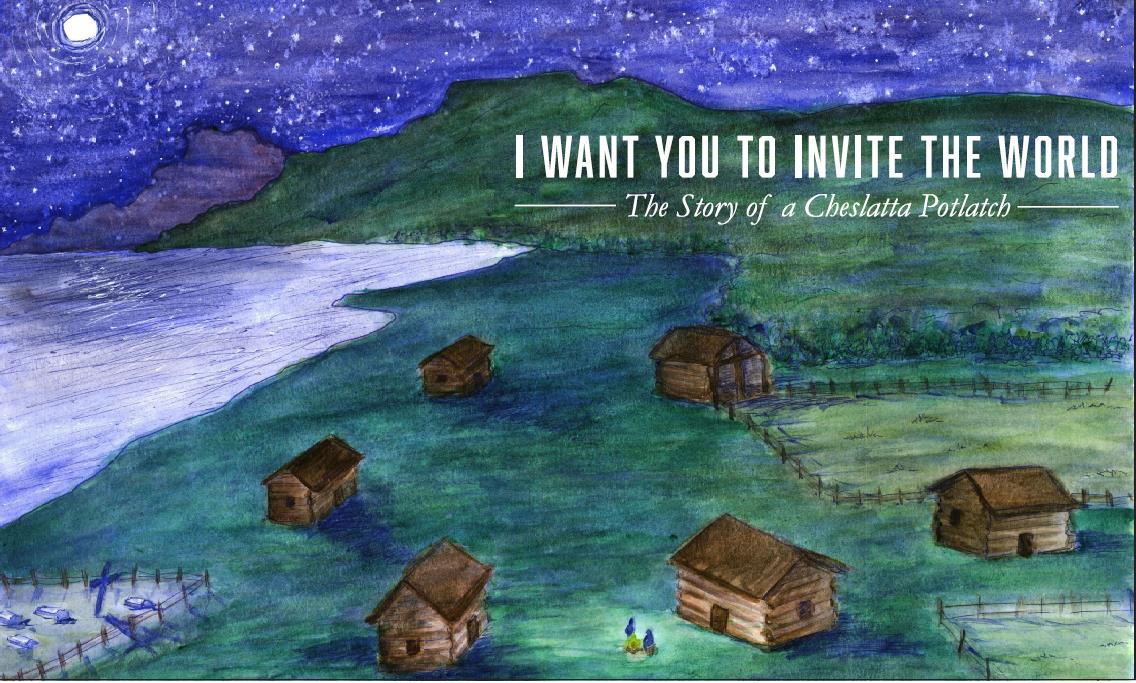 Soren Larsen, department chair, recently shared this children's book co-written by him and others at a conference at the University of Kentucky. It is about the Cheslatta Carrier Nation in Northern British Columbia.

Geography’s own Soren Larsen was invited to the University of Kentucky Oct. 3-4 as part of a colloquium series where he discussed his current project titled “The Gift of Art/Power of Place” involving the role of art as a boundary object in place-based indigenous research.

During the presentation, Larsen, geography department chair, discussed a children’s book — I Want You to Invite the Word! The Story of a Cheslatta Potlach — co-created by him, the Cheslatta Carrier Nation, and MU students Hayley Portell (illustration) and Maddie Davis (layout). It tells the story of the indigenous band’s chief who hosted a potlach in the 1930s in Northern British Columbia and instructed the clan to “invite the world.”

“This was during the great depression in Canada when most people were poor,” says Larsen. “But Cheslatta was bountiful. So, the chief invited the world to share in the bounty of Cheslatta.” Hundreds upon hundreds of people came to the potlach that lasted weeks and took years to prepare, Larsen says.

“I have always wanted to create a nonacademic book for the Cheslatta people that celebrates their history and culture and survival,” he says. “The Cheslatta people were flooded out of their homeland in 1952, and everyone knows that tragic story. But this book celebrates the potlach tradition of the people. The story looks to the past as a way of looking to the future.”

About 45 individuals attended the hour-long colloquium presentation. While there, Larsen also worked with grad students, networked with faculty, and learned more about the University of Kentucky’s graduate program.

“I also met with Julie Saperstein, former master’s student here at Mizzou, and we discussed potential recruiting pipelines between our two programs.” For example, their undergraduate program is more focused on social theory and digital geographies. MU’s is more community and public-sector based. “They may want to send students here for areas of geography they don’t cover that we do,” Larsen says. “And we have already sent master’s students there to their PhD program: Julie being an example.”

Larsen says he hopes attendees walked away with a better understanding of the Cheslatta people and their story. Also, he hopes they saw a fresh way of thinking about the role of art in participatory research.

“It was the first time we had a prototype of the children’s book for people to look at,” Larsen says. “They were the first audiences to see the prototype, beyond the Cheslatta chief and council. They got it first. It’s a gift for the Cheslatta people and they will decide if and when they want to publish it.”

Larsen says elders with the indigenous band, along with their chief and counsel, had a lot of input and shaped the story, meant for middle school-aged children.

“This is their story,” Larsen says. “We (myself, Portell, Davis and Eli Larsen) learned the story when we were there doing research the summer of 2018. We simply collaborated with Cheslatta to tell it in the form of a storybook.”

Some of the pre-artwork — watercolor painting and photographs — graced the hallways of Stewart Hall as an open exhibit in 2018. The book, when published, will be listed without an author due to the group collaboration on the project.