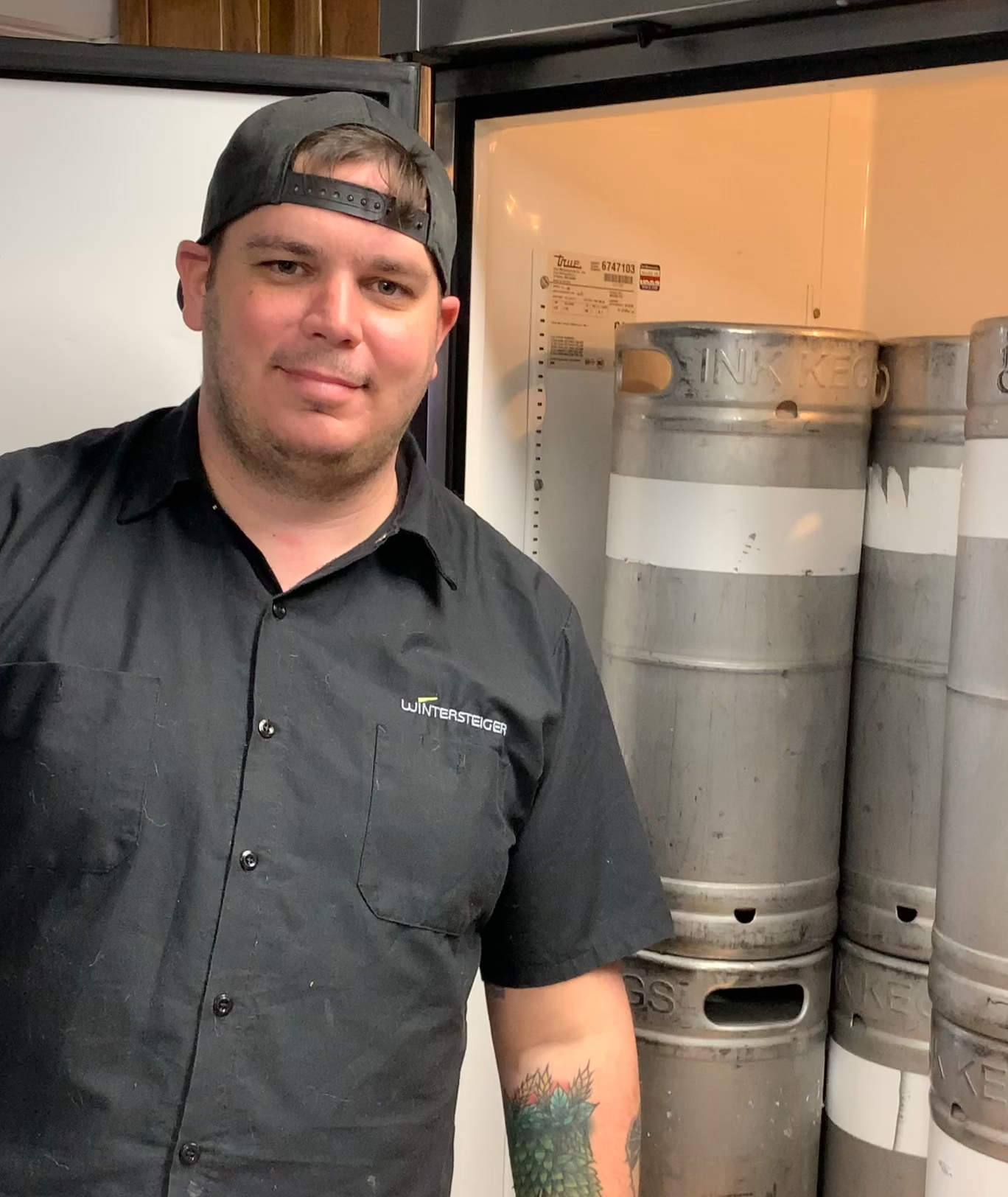 Department’s own Ian LaGrace at helm

What do you do if you love geography; Fancy beer; Want a job that allows you to travel the world; Want to be an entrepreneur; But hate the daily grind of desk work?

You open your own geography brewing company.

The duo are owners of Waypoint Brewing Company, which is no ordinary distributor. They do high-end, outside-the-norm beers — the type that usually are harder to find in mid-Missouri.

Beers with a blush of geography inside and outside of every can. Beers from around the world. Beers that quench thirst and satisfy connoisseurs who like something fresh, new, different. Beers that use higher-end ingredients and brewing practices particular to various world regions.

Pints like Kolsch, which may be familiar to some, but without a huge pull in the Show Me State. “The cool thing about a Kolsch is that it originated from Cologne, Germany. So, it uses a strain of yeast and also German hops, which come from that region,” LaGrace says.

They are also working on a double dry hop, hazy IPA using a Nordic strain of an ancient super yeast called Kveik. “It ferments at a much higher temperature, and again, I don’t know a lot of breweries here in mid-Missouri who are using that strain of yeast,” LaGrace adds. “So, we are actually going to label it as a Nordic IPA.” This is a more expensive beer due to the price of hops and the quantity, as well — about six pounds per barrel.

The Kveik is just one of many types of yeast strains from around the world he hopes to use. “I’d like to go to the different regions and cultivate yeast in those areas and then bring them back to use it here,” he says.

A third type of beer they are working on is a low-calorie IPA. Lasley owns CrossFit Fringe, a fitness center above their brewery at 901 Old 63 North, and the partners thought it would be a good fit for Lasley’s customers.

Yet a fourth on the lineup, is a Chicha, a beer made out of corn by locals in Peru.

“We are going to brew a ton of beers,” said LaGrace. “We’re going to push the boundaries while seeing what sells. One goal of ours is to have a lot of seasonal beers and less staple beers. So, beers that we will brew once and year, and then won’t have it again until the following year.” 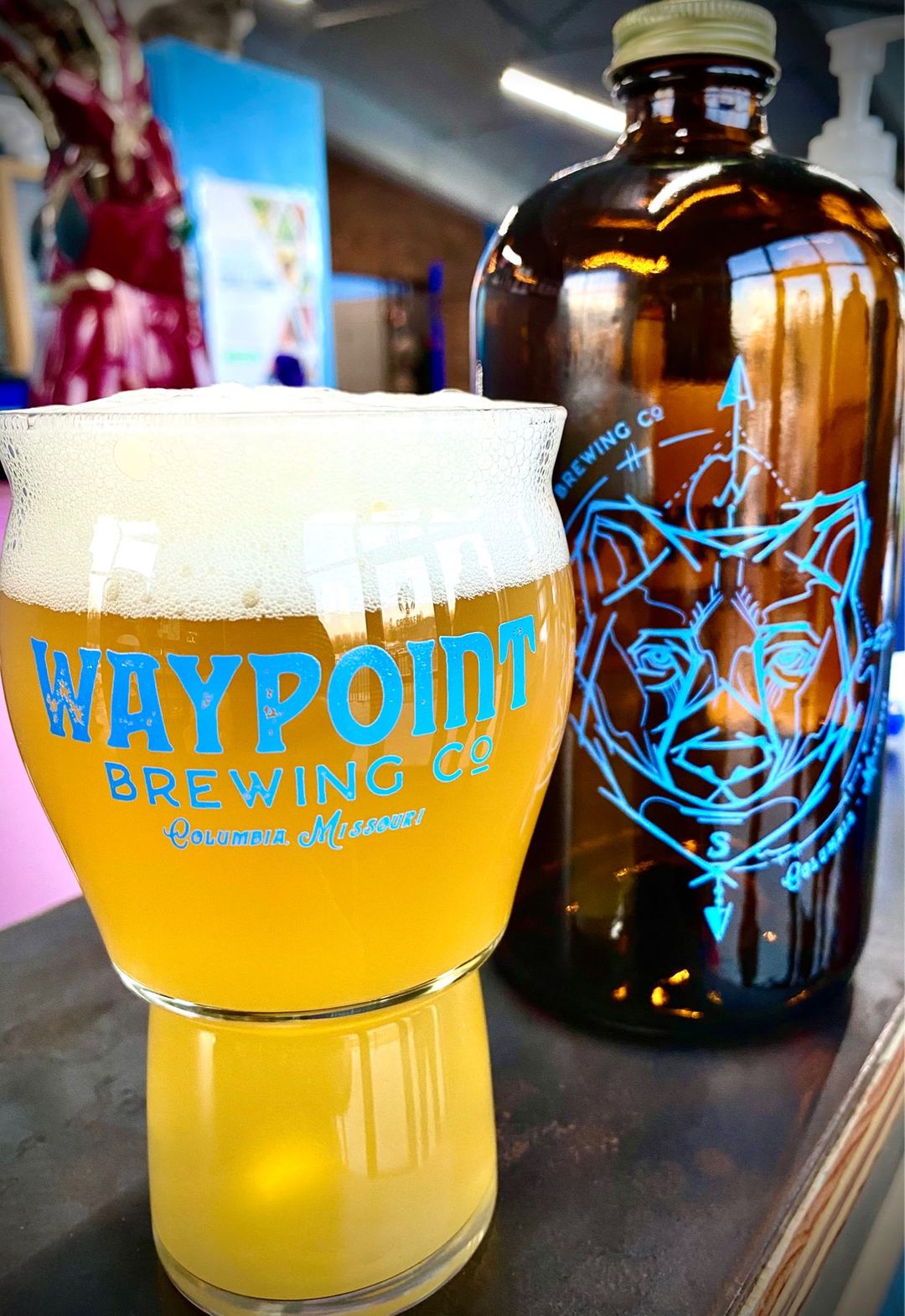 They sell their product in 32-ounce bottles to go, and also on tap in local establishments. The bars and restaurants so far include iTap, The Social room, 9th Street Public House, Pappo’s Pizzeria and Pub, and others. They are having an event at Cooper’s Landing on Saturday, March 27, giving out samples and also will have beer for sale beginning at noon.

They are having an event at Cooper’s Landing on Saturday, March 27, giving out samples and also will have beer for sale beginning at noon.

The beers are higher end, not only due to the ingredients, but also due to the reverse osmosis system they are using for filtration of water. Most breweries use carbon filters. Their system uses more water, which drives up cost but it brings the water profile to a state of zero, hence a higher quality. LaGrace explains the grains lead to the alcohol content due to the sugar in them, but the hops add the flavor. Complex IPAs, for example, requires more hops. Most of his beers will have a higher alcohol content, as well.

The beers are higher end, not only due to the ingredients, but also due to the reverse osmosis system they are using for filtration of water. Most breweries use carbon filters. Their system uses more water, which drives up cost but it brings the water profile to a state of zero, hence a higher quality. 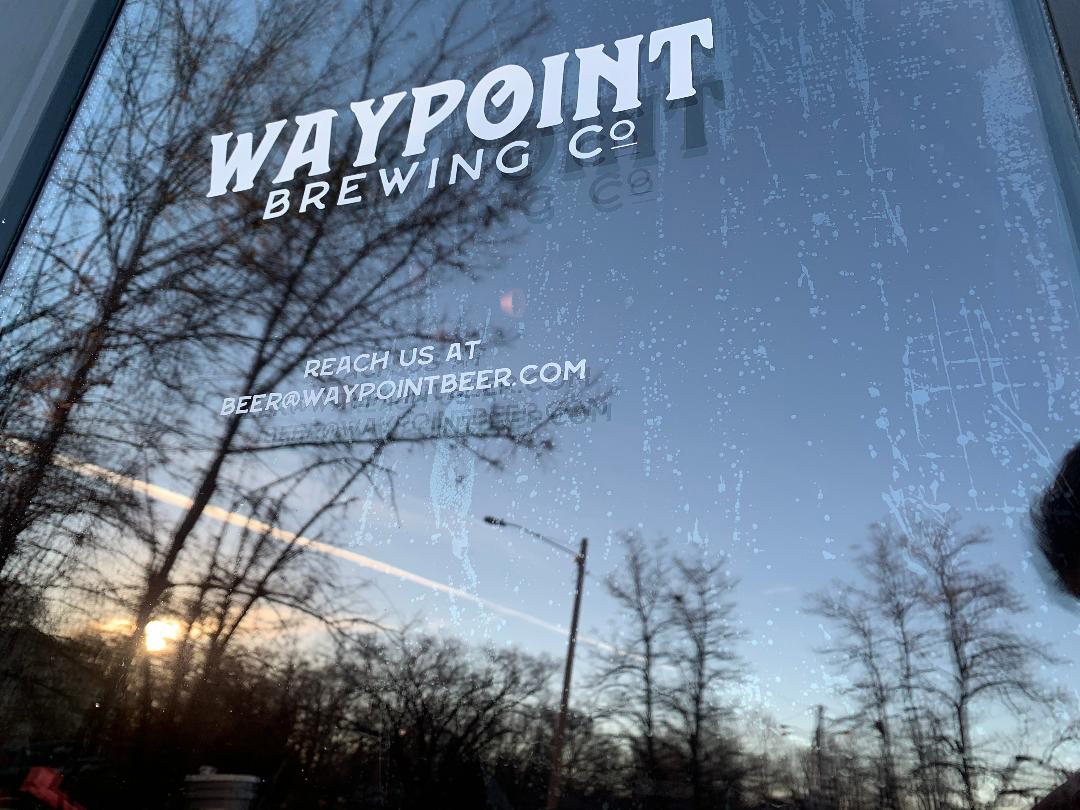 The sign on the door at Waypoint Brewing Co.

LaGrace lived a nontraditional life before going to Mizzou. He served in the military before he began his geography studies and traveled the world doing so. “I lived the life before being a student,” he says. “And when I went back to school, I loved geography. To be completely honest, I loved human geography but was afraid of the job market, so I majored in that and chose a GIS emphasis.”

He was so dedicated, he even landed a GIS job while still a student. “It was a great job,” he said. “But I learned really quickly a desk job wasn’t something I really wanted to do with my life.”

So, when he got laid off during Covid-19 due to the company’s loss of several important contracts, he went to his wife, Riane, for guidance. “And she was like, ‘well you know — you didn’t’ really like sitting at a desk, what do you want to do?’ and I jokingly said ‘I want to start a brewery,’ and she said ‘well, then do it.’ So, I said ‘okay.’ And so here we are.” 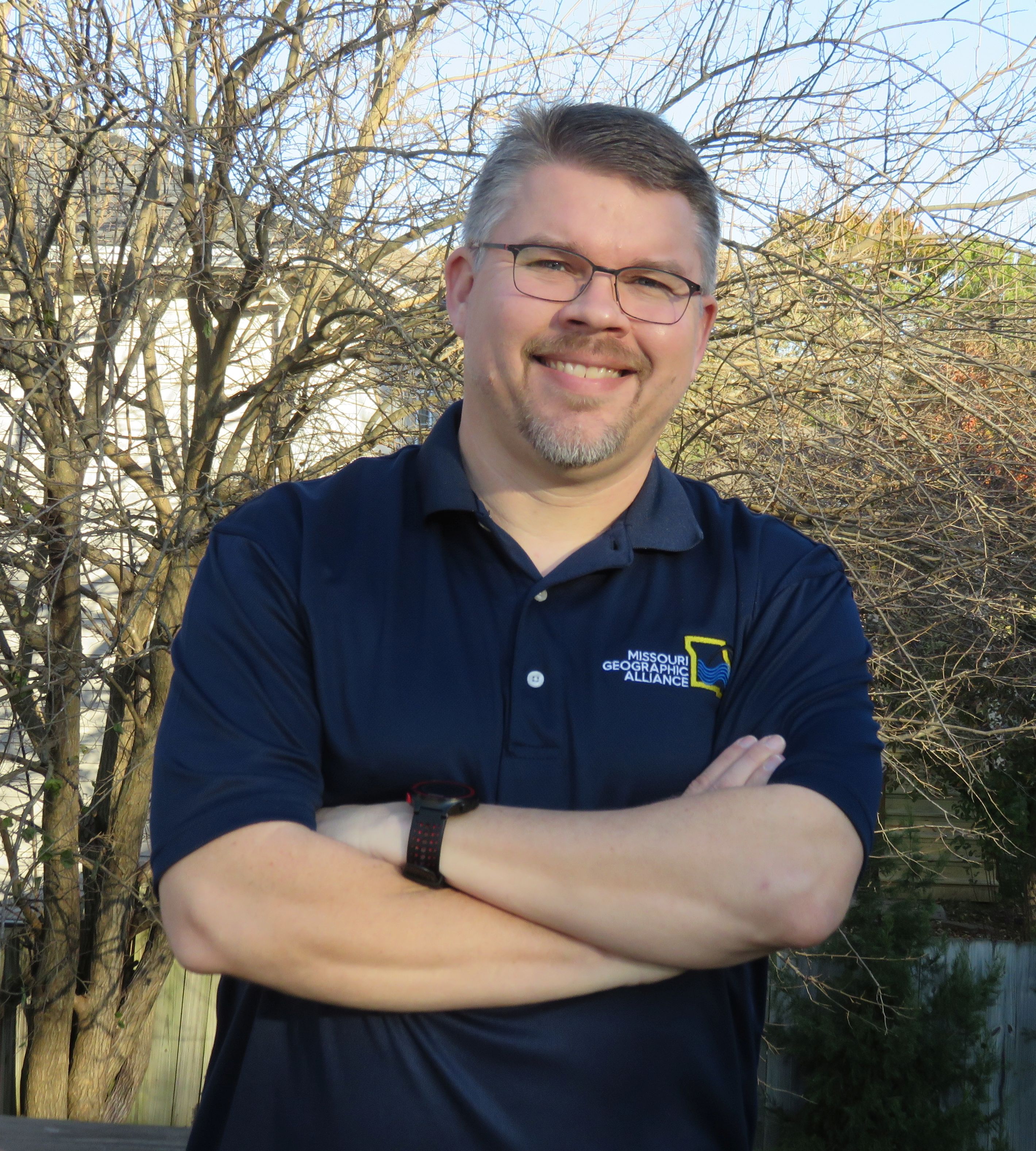 Waypoint Brewing Co. recently opened doors. LaGrace and Lasley worked on the business since March 2020, and until now had everything ready but the green light — the licensing. “We were gung-ho and ready to go,” LaGrace says. “But we had to put our foot on the brakes and wait for licensing to come through.”

LaGrace has been brewing beer since he was about 21 years old for personal consumption. “The transition to a business has been an easy transition,” he says. “The production is a lot easier in a lot of ways, but there are also a lot of things that I’m learning along the way, which has been really good. It’s also very challenging, which is good. I like being challenged.

He said he was a senior when he temporarily left Mizzou due to some life circumstances: the death of his mom (he was in charge of the estate), and some military-related injuries. But he is so close to graduating — just a handful of classes away — he said he is definitely coming back to finish. “Plus, if I told Dr. Hurt I wasn’t going to finish, he’d probably strangle me,” he laughs.

And he’s able to take some of the classroom learning and apply it to the real world, as evidenced by his new business. - Doug Hurt

Doug Hurt, director of undergraduate studies, said he fully expects LaGrace to complete his degree program. “Ian’s a great example of the diverse interests that geographers have,” Hurt says. “And he’s able to take some of the classroom learning and apply it to the real world, as evidenced by his new business.” 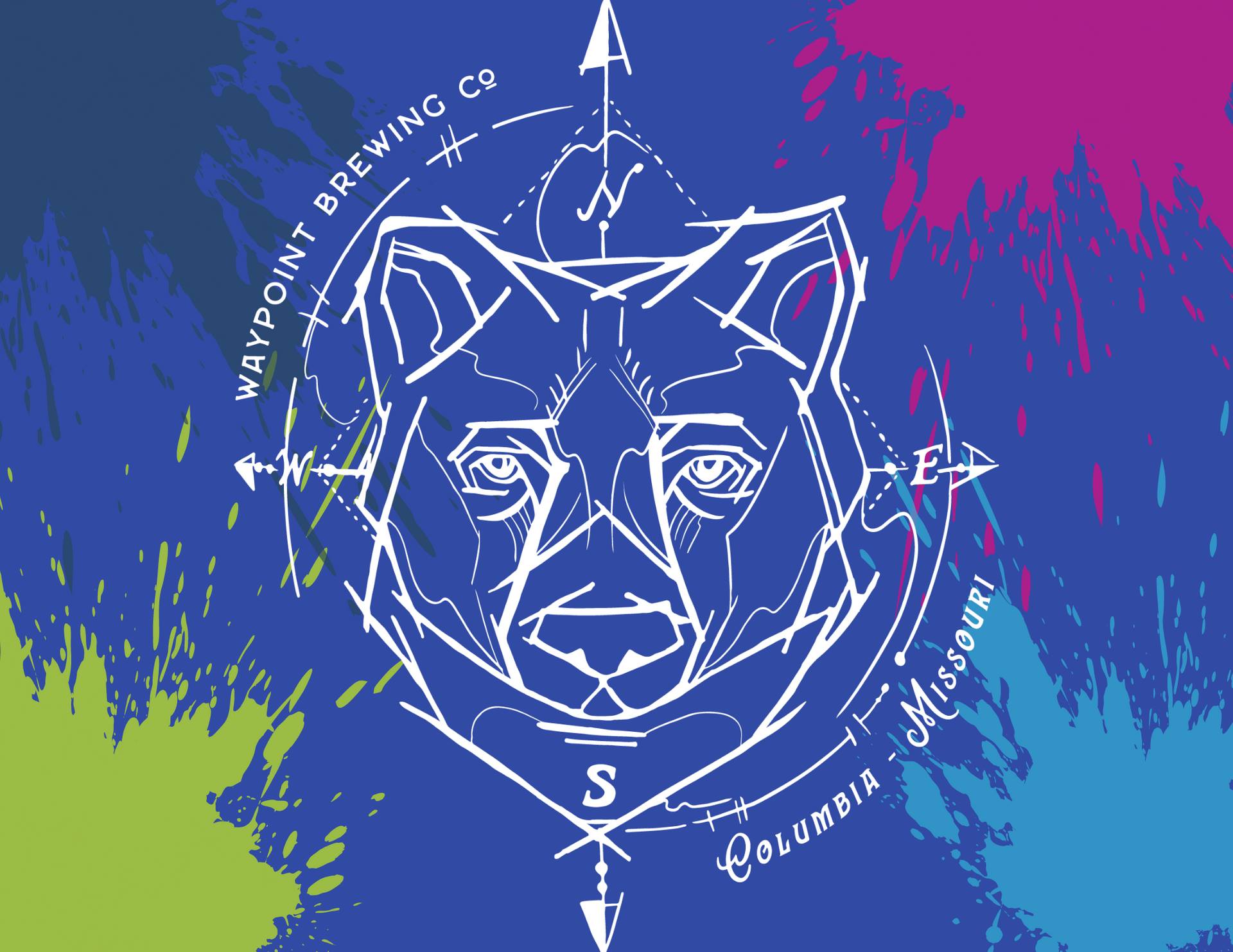 LaGrace says he still has passion for human geography, traveling, exploring different cultures ….. “So, the opportunity was to be able to brew beer and also bring that human geography to the process,” LaGrace says. “That seemed like a no brainer.”

LaGrace and Lasley have big plans, but are smart enough to know to start small, very small. Currently, they are a one-barrel nanobrewery. One barrel produces 31 gallons of beer each time they brew, which translates to 248 pints of beer. “That’s why we are starting off with three beers,” LaGrace says. “But I could brew another batch tomorrow and we would have a fourth one. That’s the nice part of being so small.”

They currently have three fermenters, containers that hold beer for two weeks to a month to process the beer and turn the grains into alcohol.

“We hope to be on a seven- to 10-barrel system. That’s more aligned with what our long-term vision is. We also want to be a taproom model. We don’t have the taproom open yet, but once we do, we plan on most of our consumption being on-premise.”

The taproom will be a turn-of-the century place, decorated with maps, and have the feel of an expedition lodge. The branding will incorporate a compass on it, as well as other geographic references. 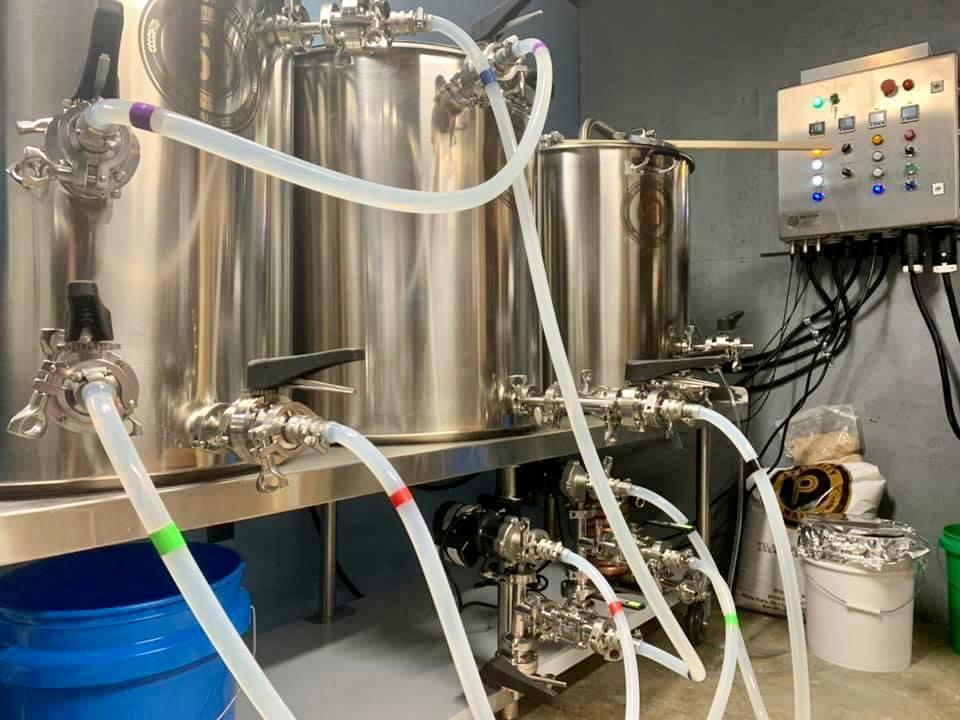 Equipment at the Brewhouse

He said Columbia residents are loyal to Columbia businesses, which is a bonus in the industry. “Our market is beer lovers,” LaGrace adds. “There are lots and lots of beer lovers in Columbia.”

Their name, Waypoint, refers to a stop along a journey – a geography term. “We think a lot of people passing through I-70 are going to Kansas City or St. Louis,” he explains. “We would be a waypoint on their journey.”

LaGrace said in addition to loving beer, he loves the history of its origins, one of the earliest currencies in the world. “The slaves, when they were building the pyramids, were paid in beer every day, and when they were done each day, they were given beer,” he explains.

“I really like trying new things and learning new things and that’s the cool part of this process with the brewery. It is always changing, always something new. As soon as I master something, I can try a new style, try a new type of beer, ferment with a different kind of yeast. It’s always going to be changing.

“I can challenge myself in a million different ways, whereas when I had the desk job, it became the same thing over and over and over. It was hard for me. Now it’s easy to be motivated. We are also putting something out there that people will enjoy.

“It’s kinda cool. It would be super motivating as well to go into one of these bars or restaurants where we are going to be selling our beer and see people enjoying what we created.”

For more information, and updates on where you can find their beer, check out their Facebook page: Waypoint Brewing Co., or visit them on Instagram at waypoint_beer.