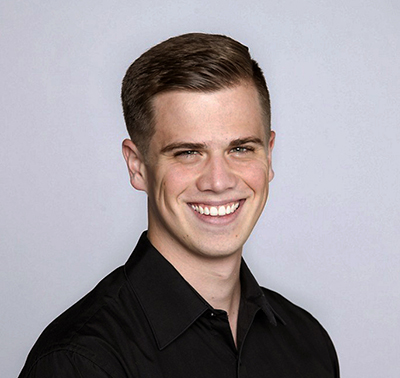 Scott MacDonald, geography’s first “A&S Professor for a Day,” and an honors graduate of geography (BA ’2015), joined students and faculty from around campus via Zoom from Redlands, California, to share his journey from Mizzou to his current employment at Esri, the leading geospatial software company in world.

He shared his experiences in environmental geography and his perspective of geography, as well as his thoughts on GIS as a career.

MacDonald, a product engineer on the ArcGIS Enterprise team at Esri, continued his studies in geography at McGill University in Montreal, Quebec, and researched greenhouse gas admissions in peat bog areas in Alberta before signing on to Esri.

“His team at Esri helps governments, companies and organizations from around the world,” said Soren Larsen, department chair. “He has gone on to do such great things … and we are lucky that Scott agreed to join us.”

MacDonald emphasized the importance of students understanding their own personal definition of geography based on their unique experiences, and realizing the different dimensions of the field, which is “broad, holistic, and interdisciplinary.”

Geography, MacDonald explained, includes the Earth’s surface, from  “slightly below the surface, not quite to the bedrock” to “not quite to the atmosphere.”  Geography, in its broad sense, studies the causes and effects of everything that can take place on the surface of the Earth, and therefore encompasses all the sciences, including math, physics, chemistry, earth science, geology, zoology, biology, marine science, atmospheric science and more. On the human side of the equation, it also includes geopolitics, demography and cultural, historical and economic geography.

In addition, there are geographic tools, including statistics, cartography, epidemiology, GIS and much more, used by geographers in their studies. All geographers study place, space, scale and landscape, he added, stating geographer’s most effective tool is the map, which tells a story of place or geographic problems. “Every map answers a geographic question.”

He mentioned the profound influence professors in the geography department had on him, such as Mike Urban, Grant Elliott, Matt Foulkes and Doug Hurt, among others. He praised the small size of the Mizzou geography department, adding its intimacy provides a hands-on academic style and allows for faculty mentorship.

Some of his advice to Mizzou majors: 1) Make the most of your years at Mizzou (i.e., get involved, be curious, get to know professors, build a network, attend a conference), 2) Be perseverant to get a job (i.e., expect rejections but apply anyway, make meaningful connections, advertise skills and interest, ask questions that matter to you, advocate for yourself), and 3) Embrace who you are (i.e., appreciate your unique perspective, take the window seat, set yourself up for ah-ha moments, don’t forget to enjoy yourself.)

“All these things that we learned in our classes, make life more interesting for us,” he added. “Make life richer for us.”